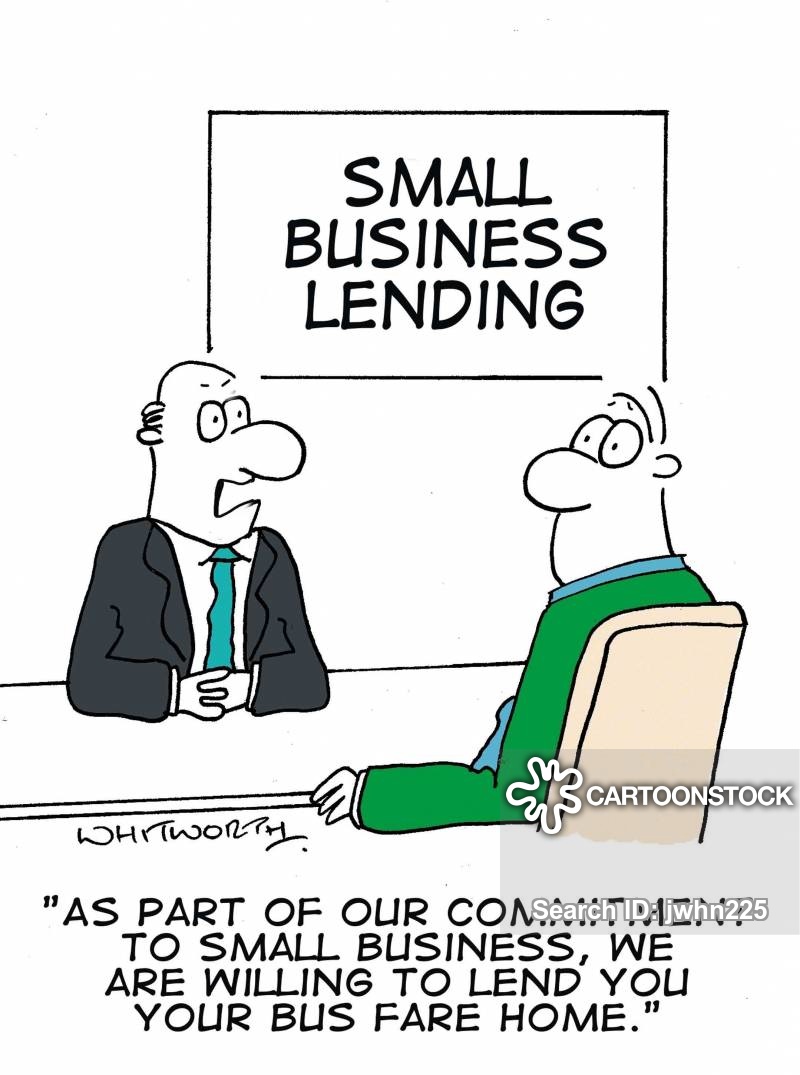 All of the talk about providing loans to businesses to help them get through the Covid-19 crisis is totally missing the point, and shows how out of touch Washington is with the actual needs and daily lives of small business owners.  Loans do not help when all they do is cover the expenses accrued during a period of lost revenue that will never be regained.

It is literally like agreeing to make payments on a car loan but never getting to drive the car…why would anyone agree to do that?

Realistically, as soon as you accept that you are stuck walking either way, you will quickly see that (as a business owner) you are better off just walking away, rather than take on those payments.

If you have not read my previous article on the overall situation people and businesses are facing, and a sensible solution that is not being discussed by Congress, you can read it here…

PAUSE: A Real Plan To Survive AND Thrive Economically During Covid-19

One of the key concepts of that plan is to find a way that both individuals and businesses do not face an insurmountable amount of new debt once this health crisis is over and people can get back to their normal routines.  For example, the President issued an order through HUD suspending evictions and foreclosures during this crisis for people that are unable to pay their rent or mortgage due to income loss.  This is one of those many actions that certainly helps in the short term, but it completely lacks any thought to what happens in 3 months or 6 months, or whenever this ends.  Simply put, your landlord is going to expect you to catch up, and while some may be more lenient that others, if you have gotten 3 months of relief from eviction on your $900 a month apartment, you are now looking at a $3,600 bill at the beginning of month 4.  Can anyone living in a $900 a month apartment afford that?  Few, if any is the answer, and with the eviction protection eventually lifted, you will be on the street.

Here’s the larger problem…deferring payments while allowing debts to mount will crush any individual or small business, because you can never make up for the revenue or income you have lost during that same period.  Employees, regardless of what you do for a living, are essentially trading their time for money.  When you are not working for an extended period of time, or even a few weeks, that time is lost forever, and as such, so is the income.

Specifically, loans are one of the things that both parties and the President keep talking about.  President Trump himself announced last week that he wanted the SBA to begin working with businesses on providing more access to loans.  Now, in the face of this crisis, I would like to be able to say that everyone is working hard on solutions that actually help people, but in this case, the President is completely tone deaf when it comes to loans, but then, given his business track record, he has generally viewed loans as free money that never has to be paid back…that’s what bankruptcy laws and lawsuits are for after all.

For now though, maybe some of you are not as familiar with the finances of small businesses as others are, so I would like to explain a few things.

All of these costs need to be accounted for and exceeded by revenue when a business is in operation if they are going to remain profitable and therefore viable.  In general, the minimum amount of revenue required for a business to exist must at least cover all of the fixed costs, and whatever amount of variable costs are associated with providing the product or service they do.  In other words, if you are operating a restaurant, you need enough revenue to cover ALL of the fixed costs, no matter how much volume you do, and then you will need to add in at least the cost of one cook, one server, and the cost of the food served at a bare minimum.  As volume increases, you may need to add more cooks or servers, your utilities will likely increase, and of course, you will be buying more food to prepare and sell.  The advantage to more volume is that you spread those fixed costs, like rent, over more orders, thereby reducing the cost tied to each meal served.  That’s why the assumption that greater volume reduces cost is true, generally speaking.

Now, on the flip side, when that same restaurant goes into a total shutdown, as is the case in many locations today, the variable costs (assuming you lay off all of your staff) go away completely, or are reduced to such a small amount you can barely measure them, but those fixed costs keep accruing and debt increases, yet there is absolutely no revenue to offset them.  In a small restaurant, it is not uncommon to see rental rates on the space be upwards of $25 per square foot or far more in some places (and the same goes for retail spaces in general).  If you have a 5,000 square foot establishment, the rent alone is over $10,000 a month.  Add in the costs of insurance premiums, basic utilities, property taxes, etc. and you could very easily be looking at $20,000 a month for a fairly small restaurant.

With what I am hearing Congress and the President talk about, as well as many so called business experts, they want to offer loans to these types of businesses, and on top of that, attach strings that they expect them to keep at least some of their employees on the payroll.  So, if this small restaurant complies with that and does try to keep a few employees around, say they retain 5 workers at a cost of even $25,000 a year, throw in payroll taxes and worker compensation, and those employees will cost in the neighborhood of $30-$35,000 annually, so on top of the monthly fixed costs, you are now looking at another $12,500 per month.

So, in total, that one small restaurant is looking at somewhere between $30,000 and $35,000 per month during this shutdown.  In a perfect world, maybe this shutdown only lasts 1-3 months, so maybe it takes a $100,000 loan to float this business.  A few days ago, the Department of Health and Human Services released a report that this pandemic could go on for as much as long as 18 months.  I won’t go as far as to assume that will be the case, but 6 months is certainly not beyond the realm of possibilities, meaning a $200,000 loan is potentially needed.

Here is where things get ugly.  Once the restaurant re-opens, and even assuming their volume of business returns to pre-pandemic levels on day one, you need to understand that businesses like this, in all different types of industries, do not net huge profit margins. usually in the single digits when all the bills are paid.  So, if you add that $200,000 loan on top of normal operating expenses, even at 0% interest, you could very easily be looking at that restaurant needing to commit every dime of that net profit to loan repayment for 2 or 3 years.

I assume most of you at least have some idea of how much time, stress, energy and effort goes into operating a small business, along with all of the financial risk.  The rewards, if things go well can be amazing, and you hear success stories all the time, but in a situation like this, when “things going well” means turning no profit for the next 2 to 3 years, and a bad break or two means bankruptcy, why would anyone even try to continue their business?

The sad reality is that the owner would be better off closing right now, permanently, walking away from their fixed cost obligations and just holding onto whatever cash they have put away to do something different when this mess is over and simply sustain themselves in the meantime, and that means that 90 days from now, when we get the all clear and those former employees are ready to go back to work, there will be no work for them to go to.

That is why there are a limited number of things that can be done right now to make sure millions of Americans will even have a job to return to when this crisis is over…whenever that is.

What most in Congress and the White House seem to be suggesting (in various forms) is the Federal government spending huge amounts of money to “stimulate” the economy and preserve it.  Right now, they are talking about a $1 Trillion bill.  Obviously, that is a HUGE number, and one that we have never seen the government spend on one crisis before, even the banking crisis of 2008.  Here’s the thing, though…it is not nearly enough, not by a long shot, and here’s why:

In the United States, our economy if you add total GDP (the value of all goods and services produced in this country) and the total annual personal income (which is a number that will be roughly the same as the net value of the work we all do, and therefore the income we all need to survive), you get a total north of $30 trillion annually.  Now, if you think that with a near total shutdown of businesses and jobs, except for essential services, we could realistically lose 50% of each – business revenue and personal income, or $15 trillion per year.  That means, if the Federal government’s plan is to effectively replace all of that, however they do it (loans, grants, unemployment compensation, or whatever), it will take something like $1.25 trillion PER MONTH for each month this crisis goes on.

Is that sustainable?  For how long?  And more importantly, if spent the wrong way, like in the example of small business loans above, the negative economic impact will extend for years beyond the end of the actual health emergency.

Make the accrual of debt go away.  Make the expenses that both businesses and individuals face to just exist go away.  Make all of it go away until this health crisis is over.  That provides 3 massive benefits to every individual and business, and to the American economy as a whole:

If you want a small, real life example of this in action, I received an email yesterday from Ally Bank.  They have already taken in upon themselves to extend a similar offer to their customers.  They have offered to defer any mortgage payments or car payments on any loans they are carrying for 120 days, with no penalty, no negative credit reporting, and no large lump sum due at the end of 120 days.  They will be allowing interest on these loans to continue to accrue for the 120 days, but the payments that are missed will just be added onto the end of the loan.

My point with this example is that even if you don’t believe me and my theory, hopefully you will believe a multi-billion dollar financial institution effectively taking the same approach.  The only thing we need is for it to be applied universally, and THAT is the job of the Federal government.

We desperately need a leader to not say “I think the economy will be great once all of this is over” and take actual steps to make sure that is true.  None of us can do that on our own, but a true leader in Washington can.

Then we can all just worry about food and toilet paper, and of course saying thank you to all the essential workers and businesses out there that are not only continuing to do their jobs, but often doing so in the face of great personal risk, personal sacrifice, and doing more than ever before.

Let’s get it together Washington!  It’s really not that complicated.

What are we all about?